Risk linked to the use of a lithium-ion battery

When submitted to increasing temperatures, whatever the chemistry, there is a threshold from which a thermal runaway reaction is triggered. This reaction will induce great gas generation inside the cell, which will either be evacuated through a specific vent or through the explosion of the battery casing.

To ensure the safety and for all type of chemistry, thermal runaway has to be prevented. An electronic Battery Management System (BMS) watches over the battery and isolates it from the application in case of emergency. The BMS senses battery temperature and any event leading to the heating of the battery (overcharge, over current, isolation fault…). It is a prominent component to have a safe battery and it has to be developed according to state of the art functional safety norms (ISO61508, ISO13849 and/or ISO26262 as examples). Furthermore, mechanical protections will prevent any internal short circuit to occur inside the battery during its normal usage (not protected by the BMS).

Lastly, in case of accidental thermal runaway (manufacturing default), the battery design has to be verified to prevent the thermal runaway to propagate to the whole battery (distance between cells, battery segregation, propagation test according to IEC62619).

The graphs below present the thermal runaway test results for 18650 cells with different chemistries (NCA on the left and LFP on the right). The full article can be found at the following address: https://pubs.rsc.org/en/content/articlehtml/2015/ra/c5ra05897j. 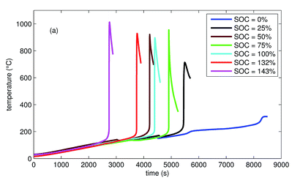 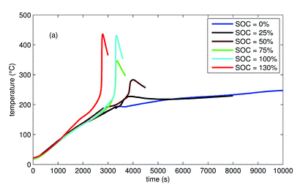 LFP cells’ thermal runaway is triggered later than NCA cells and the runaway speed is slower. But if there is a thermal runaway, it remains dangerous with a reached temperature of 450°C and a possible propagation to adjacent cells if there stick together.

You will find in the following link a video of a LFP cell thermal runaway: https://www.youtube.com/watch?v=p21iZVFHEZk . There is no fire but a strong venting followed by the explosion of the cell (between 2mn and 2mn25s in the video).

At the following address, you will find the video of the thermal runaway propagation from one 18650 cell to the other (LCO chemistry is the most reactive): https://www.youtube.com/watch?v=24fYrV2vCPk.

The following paragraph list the different risks to be considered in the design of a lithium-ion battery and the protection means that can be taken.

Protection mean recommended by WATTALPS: A BMS with the voltage measurement of each cell, the detection of voltage threshold and a state machine developped to prevent any charge after a deep discharge.

Unlike lead-acid or NiMH batteries, lithium-ion battery cannot withstand overcharge. Individual cells may be equipped with a protection of overcharge up to 12V, but this protection is not efficient for higher voltage battery systems. Overcharging a battery will therefore trigger the thermal runaway of the system.

While charging, overcurrent will lead to lithium plating on the negative electrode (LTO technologies are less sensitive to this point). Repeating overcurrent in charge will therefore create dendrites of lithium, which will finally cross the separator and short-circuit the concerned cells, leading to a thermal runaway.

Protection mean recommended by WATTALPS: The BMS must watch the battery current, temperature and state of charge. A mapping of the current limitation as a function of these variables will permit to detect functioning outside the safety zone specified by the manufacturer and result in disconnecting the battery from the application.

Above a threshold temperature (approx. 75 to 100°C), a thermal runaway reaction occurs for all type of lithium-ion technology. This will result in a high temperature of the cell, the venting of flammable gas under pressure and can lead to a fire and/or explosion of the battery.

Protection mean recommended by WATTALPS: The BMS has to sense the battery temperature and detect when exceeding the threshold specified by the manufacturer. Working outside the safety threshold has to trigger the battery disconnection from the application.

During the manufacturing of lithium-ion cells, the current collectors in copper and aluminum are cut. At this step, copper and aluminum particle may end up on the cell electrodes. After a certain period of use, these particles can cross the separator and short circuit the cell, leading to a thermal runaway of the cell.

Protection mean recommended by WATTALPS: Battery design with the ability to evacuate vent gas due to the thermal runaway of a single cell and spacing between the cells. Validation thanks to a propagation test according to IEC62619, SAEJ2464 or UL2271.

A bad battery connexion or an accident can create an electrical contact between the positive and the negative pole of the DC bus. Such a short circuit can lead to a fire combined to a strong heating of the battery, resulting in a global thermal runaway of the battery.

Protection : A fuse correctly sized has to be chosen for low impedance short circuit and the BMS  has to have the ability to open overcurrent due to short circuit with higher impedance. A test of external short-circuit like proposed by ADR (UN38.3) or UN R100 v2 will validate the configuration.

The shocks and vibrations linked to the application, as well as an accident, can create an electrical contact between 2 conductive parts inside the battery, leading to an internal short circuit with same consequences as the previous one.

Protection mean recommended by WATTALPS: The product has to be designed to prevent contacts between conductive parts and any other metallic part. Shock and vibration tests for transportation will validate the design. For example, tests demanded by the ADR (UN38.3) or by the R100 v2 automotive regulation (shocks, vibration, mechanical integrity).

An external fire can increase the battery temperature up to the threshold of the thermal runaway.

Protection mean recommended by WATTALPS: Battery design with non flammable materials and validation by a fire test according to the automobile regulation R100 revision 2.

For batteries with a higher voltage than 60V, any person in contact with to conductive parts under voltage is in death danger.

Protection mean recommended by WATTALPS: The battery has to be designed to ensure a good electrical insulation, for example according to NF EN 61439-1. The design has to be validated with a dielectric test at 2 times the nominal voltage + 1000V and by measuring the isolation resistance according to UN R100 revision 2 automotive regulation. An isolation control device can be added to the system to permanently monitor the insulation resistance between the battery poles and the chassis.

We can conclude that there are 2 main contributors to the battery safety: