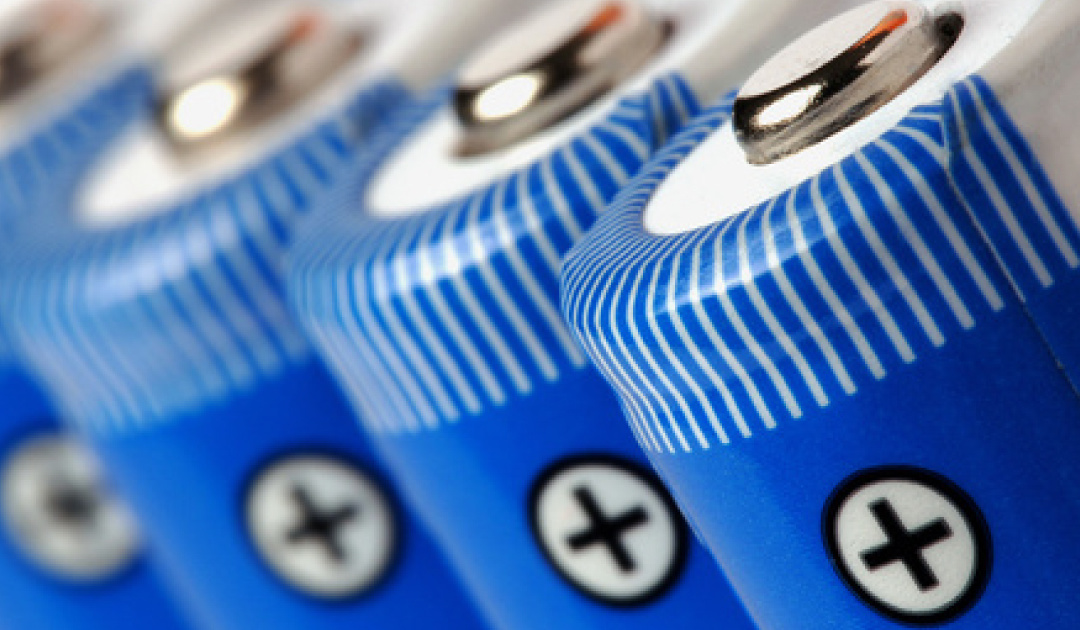 As explained before, the wording “lithium-ion battery” covers a wide range of technologies. It is possible to have different chemistries for each positive and negative electrode (anode or cathode). Each technology has its interest, as shown in the following figure coming from a public report of Boston Consulting Group. 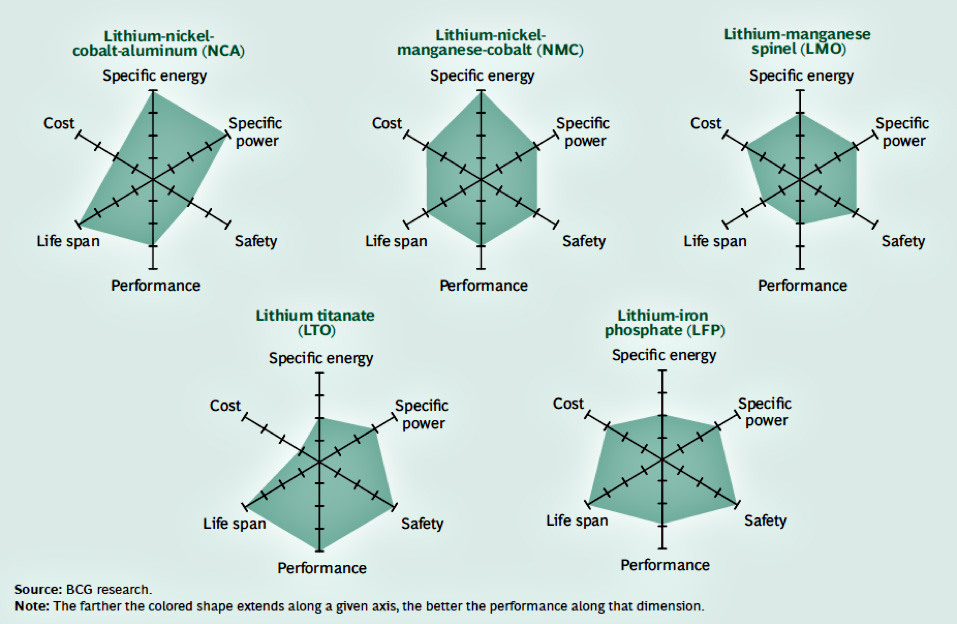 The name of each technology is derived from the active materials of its electrodes. Very often, it comes directly from the name of the positive electrode active material. To compare these options, the characteristics used in the previous figure are generally used (specific power, specific energy, cost, life, safety). For the battery life, two main characteristics are to be considered :

Some lithium technologies can have different behaviors for theses two kink of aging.

This is the technology of the first lithium-ion accumulator commercialized by Sony in 1991. It presents a very high energy density and a relatively easy manufacturing process. Nevertheless, Cobalt dioxyde (CoO2) instability gives it a poor intrinsic safety and speculations on the Cobalt price increase its price. This technology is still used in cellular phones and laptops. It has specially been famous in the middle of the 2000s with phones and laptops catching fire (Sony has lost a lot of money on this topic) and more recently with the Boeing 787 stuck on ground due to faulty batteries.

This technology appeared very little time after the LCO. It permits to answer to the problem of Cobalt speculation by swapping to a highly available and low cost materiel: Manganese. The energy density is a bit lower than LCO but remains very interesting. Furthermore, the intrinsic safety of the LMO active material is much better than that of the LCO. Big manufacturers like GS Yuaso and AESC (joint venture between Nec and Nissan) invested a lot in this technology. Its major disadvantage is its poor calendar life at temperature around 35-45°C. This lead to a “class action” against Nissan by Leaf’s owners in the Colorado.

This technology has been developed to counterbalance the LCO problems, especially for aging at full charge/discharge cycles. It has a little lower performance than LCO in energy density but is more stable in case of a safety event, even if it is more reactive than LMO.
NMC covers a family of structures since the shares of Nickel, Manganese and Cobalt can be adjusted. The most developed structure is the 111 NMC (equal share of each material): it is generally a good compromise offering a very good energy density at an affordable cost and adding to that a better stability than LCO. Others ratios are used, like for example 442 NMC or 622 NMC, which are also well used.

The NCA has been developed to bring maximum energy density. This technology has been formerly developed by Panasonic and Saft. It is now used in Tesla electric vehicles. NCA is very reactive and mastering its safety in a big battery system is a challenge. This is why Tesla uses a lot of small battery cells with a standard format (18650 : standard format mainly for laptops and powertools). The security of the system is therefore easier to handle with protective design solutions.

The LFP technology has been initially patented by Hydroquebec. The CEA has also extensively worked on this technology from the beginning of the 2000s and also owns some patents on this active material. LFP does not use any speculative material (neither Cobalt nor Nickel), has a good intrinsic safety (like LMO) and a very good life (calendar and cycle life). Its main disadvantage is to have a 20 to 50% lower energy density than other chemistries (mainly due to a lower nominal voltage at 3,2 V vs 3,6 V). It is extensively used by Chinese manufacturers and integrators but all big lithium cell suppliers have now a LFP product in their portfolio, mainly for its high power and cycle life characteristics. 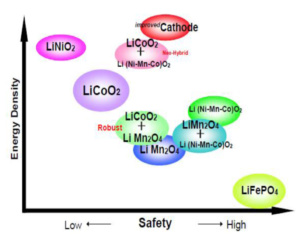 As explained before, only LFP and LMO do not contain any Cobalt and are used in great quantities to manufacture lithium-ion batteries. LFP has a clear lower energy density than Cobalt based chemistries ; LMO has a very good energy density but a much lower calendar life. In case of a shortage in Cobalt, these 2 chemistries are a safe haven. 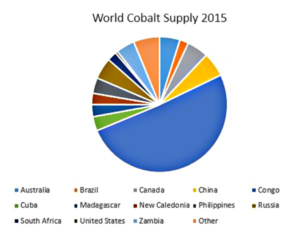 Cobalt use per market

Mass share between each material for a battery module

The cell mass is also a small part only of the total module mass: 6,5 kg out of 12 kg, making it 54%. Then for a module of 12 kg, the mass share for the different active materials is presented in the table here below: