The battery for the fuel cell

In this new TechLetter, we will focus on the case study of a battery in a fuel cell system. In an hydrogen vehicle, the fuel cell produces electricity to power the electric motor by consuming hydrogen as a fuel. There are numerous fuel cell technologies but we will here only work on the case of low temperature hydrogen fuel cell of PEMFC type.

If autonomies obtained with battery electric vehicles and fuel cell vehicles are quite similar, the hydrogen vehicle is refueled or recharged much quicker (in a few minutes). As opposed to the diesel or gasoline vehicles, the hydrogen vehicle only rejects water when used. The pollution linked to hydrogen is only generated during its production phase and is dependent on the used process. You can find more information on this topic by reading the report from ADEME .

In the fuel cell, an oxidoreduction reaction occurs and permits to create electricity and heat. There are 2 electrodes : an oxidizing anode and a reducing cathode separated by a central electrolyte. A specific tank continuously supplies hydrogen to the cathode. The cathode is supplied in oxygen thanks to an air compressor linked to the ambient air. The reaction oxidizes hydrogen (creating water) and frees electrons. These electrons supply the electrical circuit in continuous current at a voltage depending on the number of elementary hydrogen cells connected in series. You will be able to find more information on the websites of H2SYS or the CEA.

The fuel cell is generally associated to a power or « buffer » battery (as illustrated for the Audi h-tron here under). The main functions of this battery are the following ones : 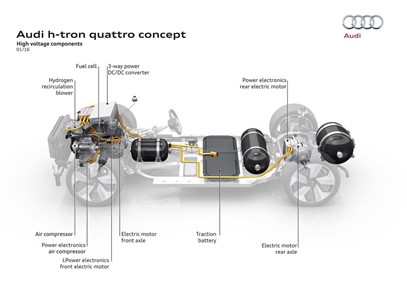 There are several battery chemistries available to make this “buffer” battery function. You will find more information on the various lithium-ion chemistries in our TechLetter : Lithium-ion positive electrode technologies. WATTALPS can offer 3 types of chemistries for fuel cell applications, the power LFP, the power NCA and the long life NCA:

You will find more information on a BMS matching these requirements in our TechLetter : The Full-BMS and WATTALPS’ products. 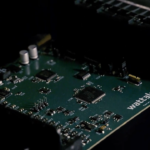 As we have seen earlier, the fuel cell functioning has challenges at low temperature dure to freezing and/or condensation issues. It requires an external energy source to heat up some of its components. Once started, the fuel cell generates a lot of heat. This heat can be advantageously used to maintain battery temperature, improving the battery performance and life. WATTALPS’ batteries equipped with a liquid thermalization system can be easily interface with a fuel cell for such a function.

Besides, the battery is submitted to high current peaks which will heat it up. At higher temperature, the battery must be properly cooled to keep its performance and life. A full and effective thermalization system is then necessary. For more information, you can read our TechLetter : Lithium-ion battery aging.

WATTALPS 400V battery equipped with a heater and a cooler

Finally, in a fuel cell system, the choice of the voltage level is dependent on the power need, on the bipolar plate surface and on available DCDC converters. The battery must adapt to the voltage level selected for the powertrain. The small WATTALPS’ module combined with battery immersion cooling technology can easily adapt to multiple requirements without redesigning a new battery. 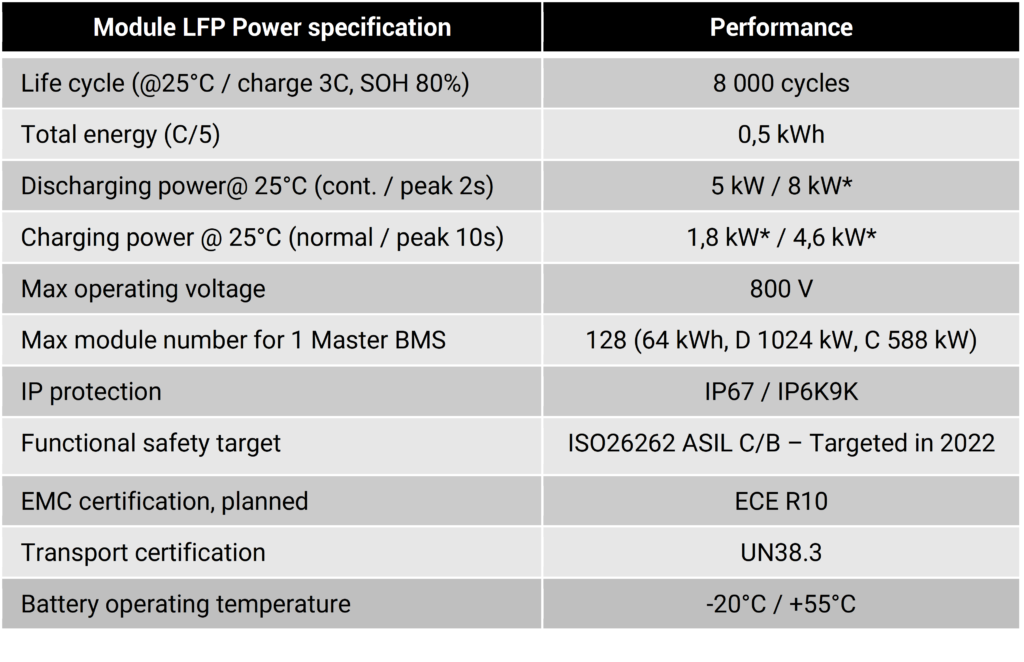 * For large volume orders, the power can be increased.